How to Make Crepes and Blintzes in Half the Time 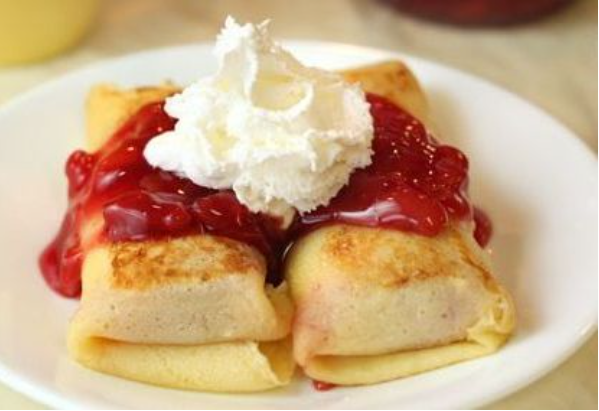 I love blintzes. They’re luscious.  I don’t like how long it takes to make them. So, we set off to make them faster, easier.

Here are five hacks that will cut your time in half, maybe more. They’re easy. Blintzes just became practical, something you can do on a busy day.

Part One: The Five Hacks

Chances are, you have a bag of pancake mix in your pantry.  It’s quick and easy and you don’t have to dig around for all the ingredients.  For all the same reasons, use a crepe mix.

Again, save a ton of time.  Chances are, you can buy the premade fillings for less than the cost of the ingredients.

These fillings come in two-pound squeeze bags.  Clip the corner off and squeeze what you need onto each blintze.

Store the remainder in the refrigerator for up to six months. 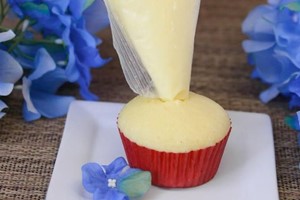 Hack #3-If you’re going to use strawberries, get a slicer.

Using a slicer will cut the strawberry prep in half and you’ll have prettier desserts.

You’ll still have to hull the strawberries, get the stems out.  Use a straw. It’s quicker, neater, and you’ll have less waste.  Push the straw through from the tip of each strawberry. 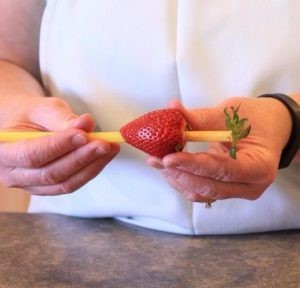 Hack #4-Use a premade fruit filling.

You can use toppings, pie fillings, or pastry fillings.  Or make your own—which is easy.  But this is a hack that will save you time.

Hack #5-Cook them in the oven all at once, instead of one at a time on the griddle.

This is a time saver.  Smear butter on a large baking sheet. Preheat the oven to 350 degrees.  Before putting the topping on the blintzes, position them on the buttered baking sheet. Bake them for 20 to 30 minutes or until they are heated through and the blintzes are just beginning to brown.

Remove the pan from the oven and place the blintzes on serving plates.  Put the topping on the blintzes along with optional whipped cream if you desire.  Serve warm.

Part Two: How to Make the Crepes

The secret to turning crepes is to slip a thin-bladed spatula under the crepe and “roll and turn” instead of “flip” like you do pancakes.  It’s much easier to do than to describe.

Turning the crêpe just takes a little experience.  Slip a thin spatula or a pallet knife under the crêpe and lift so that it hangs like a wet towel. Then with a roll of your wrist, turn the crêpe uncooked side down into the crêpe pan, much like flipping a rather floppy pancake.

Tip!  The key to cooking crepes is to to tip the pan from side-to-side to spread the batter as soon as it hits the hot pan. 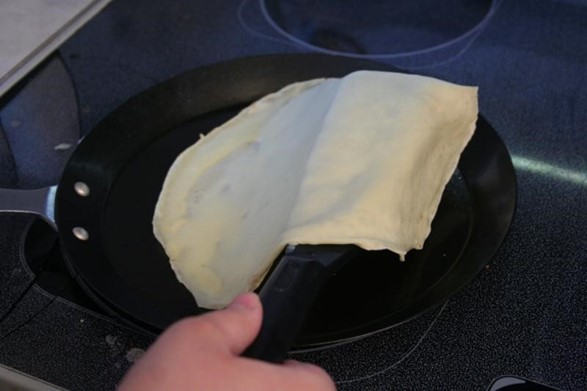 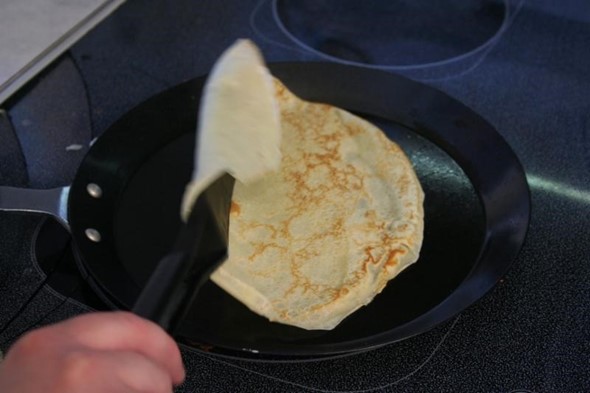 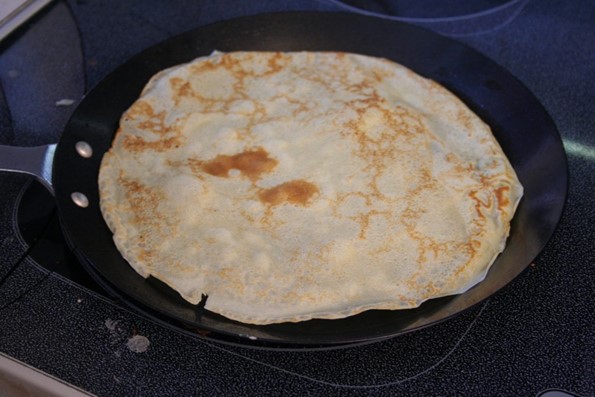 If they don’t come out perfectly or to learn more: See “Troubleshooting Crepes”

Part Three: How to Make Blintzes 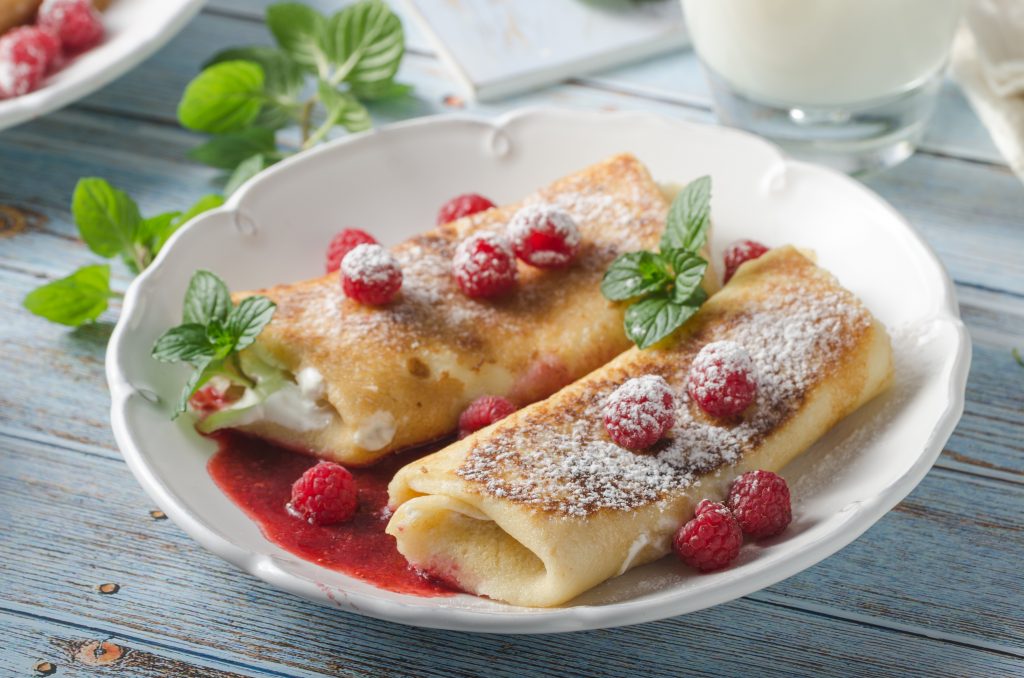 There are three parts to blintzes:

Make all three parts and then set them apart for assembly.

How to Make the Filling

The traditional filling is made with cream cheese. If you’re making a cherry or other filling, leave out the strawberries and add the other fruit.  We’re in love with our Chubby Cherry Topping and it makes terrific blintzes.

Instead of making the filling from scratch, use a cream cheese pastry filling or a Bavarian cream pastry filling.  They are both scrumptious and they come in easy-to-use packages.  Clip the corner, squeeze out what you need, fold the corner over and save the rest for up to six months.  Once you start using premade fillings, you’ll never go back to making fillings the old-fashioned way. 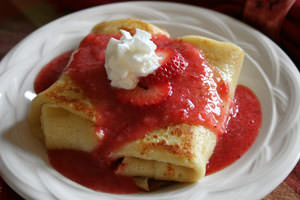 In a food processor, a blender, or with an electric mixer, blend the cream cheese, ricotta cheese, sugar, the egg yolk, vanilla, and orange zest together until just smooth. Place the filling and the strawberries in the refrigerator until ready to use.

Tip: This recipe calls for uncooked egg. If you would prefer a substitute, use the equivalent in pasteurized eggs which are usually available in your grocer’s dairy case.

How to Make the Topping

To make the strawberry topping:

Mix the strawberries, sugar, and juice together in a food processor or blender just until the sugar is dissolved and the strawberries are lightly mashed. You should have a chunky mixture.

Set aside in the refrigerator.

How to Cook and Assemble Your Blintzes

To assemble the blintzes:

To cook the blintzes:

Melt two tablespoons of butter in the skillet or crepe pan. Place enough of the assembled blintzes in the pan seam side down to fill the pan. Fry for about two minutes on each side or until golden and crisp. Keep the blintzes warm in the oven set at 250 degrees until ready to serve.

You can bake them in the oven all at once instead of frying them as explained in Hack #5.

We sell both a classic crepe mix—used to make the crepes for this article—and a chocolate crepe mix.