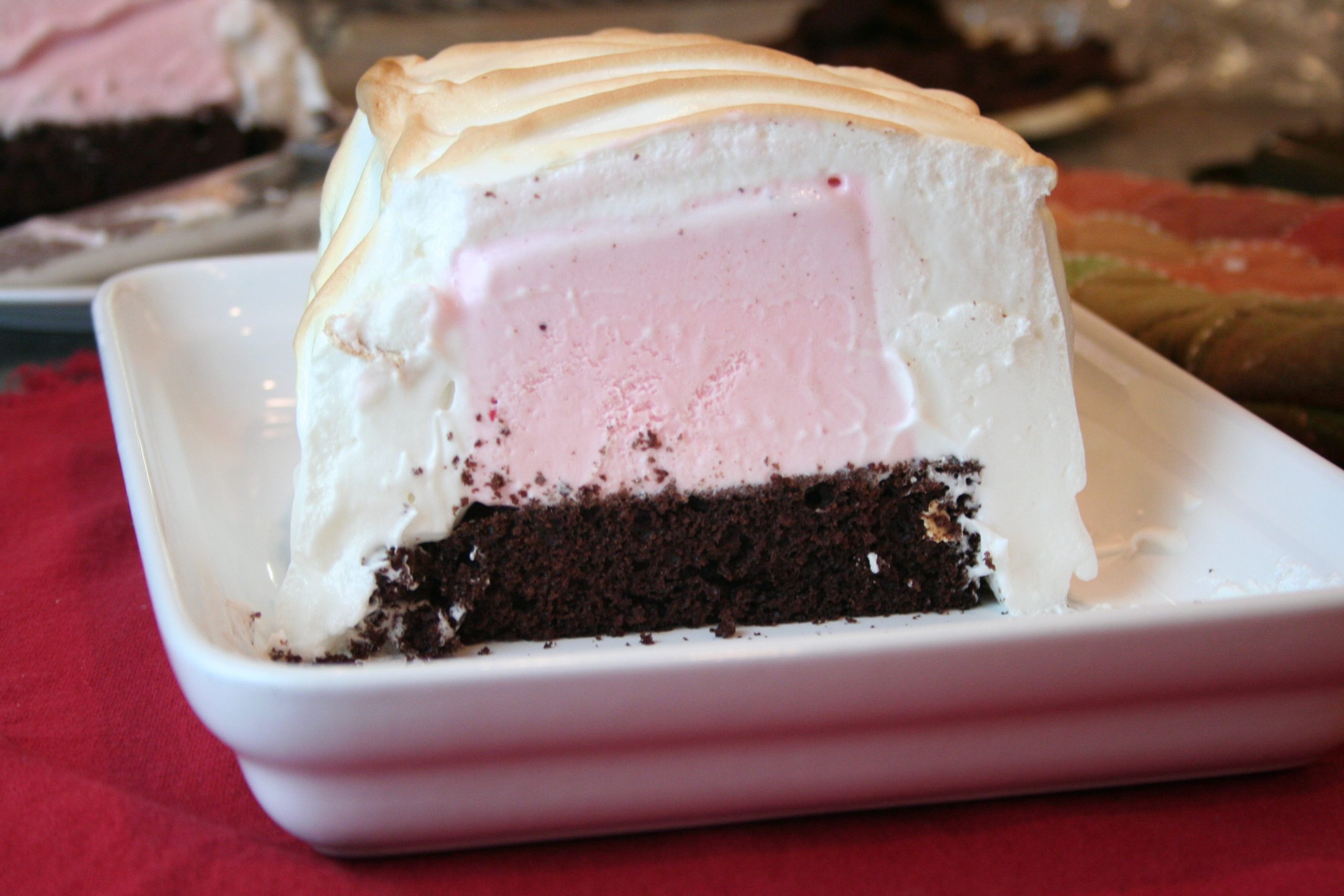 What is Baked Alaska?

A baked Alaska is a scrumptious, baked ice cream dessert made in three parts.  The base is a layer of cake, usually chocolate. Then there is a layer of ice cream.  The dessert is then covered with meringue and baked in a hot oven just long enough to brown the meringue.  The meringue insulates the ice cream to keep it from melting.

We were committed to serving baked Alaska in our store all day long.  But baked Alaska doesn’t keep well once baked, so making a batch in the morning and another in the afternoon wasn’t going to work.  We needed to make them smaller.  Furthermore, we wanted to use a brownie base, not the traditional cake base, and we wanted to serve individual desserts, not slices of one dessert.

In this article, we’ll first show you how to make a traditional baked Alaska using either a cake or brownie base and then individual baked Alaska desserts.

Since a baked Alaska is an ice cream dessert that is baked, it intrigues people.  It’s beautiful and impressive and it’s simple to make.

The baked Alaska above is made with a layer of cake for a base not with brownie as described in the recipe.  If you prefer, you can use a sheet cake about 1 1/2 inches thick and cut to size.

For our project, we used a layer of brownie using our Uncle Bob’s Extra Moist Brownie Mix.  We could also have used any of our blondie mixes such as Raspberry White Chocolate Blondies and Cinnamon Chip Pumpkin Blondies.

Baker’s note:  We made a cherry chocolate amaretto baked Alaska that was a real hit.  It was made with a  brownie base, cherry jubilee ice cream, and meringue with amaretto flavor added.

For a successful baked Alaska, start with rock hard ice cream and don’t get it too big.  If your baked Alaska large, it’s unwieldy and hard to slice and serve.  For a party, it’s better to build several small desserts than one large.  Remember that you’ll add about an inch of meringue on all sides to your cake and ice cream interior.

Preheat the oven to 500 degrees.

Baker’s note:  You will need to get your brownie or sheet cake out of the pan without it breaking.  Lining the pan with parchment paper and then lifting the brownie or cake from the pan by grasping the edges of the parchment paper is the easiest way to do so.  If you need to trim the top of the cake to create an even, flat layer, you can do so with a serrated knife held horizontally.

Our goal was to make individual desserts, to make the components ahead of time, and then assemble and prepare them in small batches.

We used an Uncle Bob’s Extra Moist Brownie Mix and baked the brownies in paper liners in a standard muffin tin. (We could also have used any of our blondie mixes such as Raspberry White Chocolate Blondies and Cinnamon Chip Pumpkin Blondies.)  One mix made 18 brownies.  To make fewer desserts, save some of the brownies and reduce the amount of meringue in the recipe.

Preheat the oven to 350 degrees. Line the 18 cavities in standard muffin pans with paper liners.