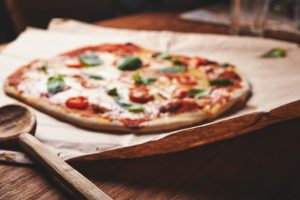 We prefer the thin, cracker-like crusts. It’s almost like eating toppings on a cracker.

They are much quicker to make. Because the crust is so thin, you don’t have to wait for the crust to rise. By the time you have your pizza assembled, it’s ready to go into the oven. If you have your toppings ready to go, you can make a pizza in as little as 15 minutes. We’ve done so in our pizza classes.

It’s a different experience. We don’t pile toppings high on a thin crust pizza. It’s sparse, maybe half as many toppings. That’s a better balance for the thinner crust and it keeps the pizza crisper.

Most pizza recipes can be converted to thin-crust pizzas. If you are building your pizzas from a mix intended for a thick crust pizza, make two pizzas from the mix instead of one. (My daughter, Debbie, make three pizzas from one mix.) And the toppings? Divide those between two pizzas.

What you do have to have is a soft, pliable dough else the dough won’t roll out as thin as it should be. Commercial bakers use a dough relaxer. Our pizza dough mixes [1] have a dough relaxer as does our pizza flour blend. [2]

It’s much easier to roll your thin crust with a pizza roller. You can roll the dough right in your pan. With this handy roller, you can roll right into corner, so you don’t have a thick crust on the edge and thin elsewhere.

If your dough doesn’t roll as thin as you would like it, let it relax for a few minutes and then roll it again.

What You’ll Need to Make Your Thin Crust Pizzas

What to load them with

It’s amazing what you can put on a pizza. Most pizzas are made with a red sauce, a marinara sauce, but it doesn’t have to be a red sauce. White pizzas are made with a white sauce. Try Alfredo, ranch dressing, the onion dip you buy at the grocery store, or a nice coating of olive oil. You need enough that your pizza is not dry but no more, especially if you want a crispy crust.

Most of the time, we load our toppings on the crust and then bake the pizza. With fresh tomatoes, we place the tomatoes on the pizza for only the last few minutes. We prefer fresh tomatoes to cooked ones.

Instead of a tomato base of marina sauce, we use a French onion dip and like it very much. This is a great pizza.

Preheat the oven to 450 degrees.

This is another great thin crust pizza that you can make in a hurry.

The squash cooks more quickly than the peppers and onions, so we partially cook the onions and peppers in the microwave until they are crisp-tender. Then we load all the veggies on the crust at once.

This is a surprising pizza and an excellent way to use the zucchini that grows so abundantly in your garden. Because it’s a mild-tasting pizza, even your kids will eat it.

Preheat the oven to 450 degrees.

What to Do with Leftover Pizza Dough

If you have extra pizza dough but would like to save it for later, you can put it in the refrigerator for up to three days. Be sure to put it in a glass or metal mixing bowl and cover it with plastic wrap to keep it from drying out.

The dough will be dense when it’s first taken out of the fridge, so you’ll want to let it rise and thaw for an hour. You can then treat it like normal pizza dough, add toppings, and bake it normally.

More pizza that you can make into thin-crust pizzas