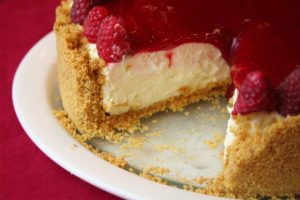 When you don’t feel like preparing a pie crust for your desserts, a graham cracker crust is the way to go. It works great for cream pies and cheesecakes, especially. But do you need to bake your graham cracker pie crusts? It depends, but you will need to expose our crust to the cold or the heat to allow it to properly set.

To Bake or Chill a Graham Cracker Pie Crust

You can bake the crust in the oven at 375 degrees for six to nine minutes. Be sure to allow the graham cracker pie crust to cool completely before adding the filling into the pie, or it will melt and maybe even separate the filling.

If you choose to chill your graham cracker crust, the melted butter you used to form the crust will harden to hold the crumbs in place and set the crust. To chill the crust, simply form the crust in the pie pan and put it into the refrigerator for half an hour to an hour to chill, or you can put it in the freezer for ten minutes.

If you use a chilled crust, try this tip for an easier release of the pie slices from the pan: Saturate a cloth with very hot water and then wring it nearly dry. Rub the hot cloth over the outside of the pie pan. The heat will transfer through the pan and soften the butter in the crust enough to make it easier to remove your pie slices. With a baked crust, that’s not necessary.