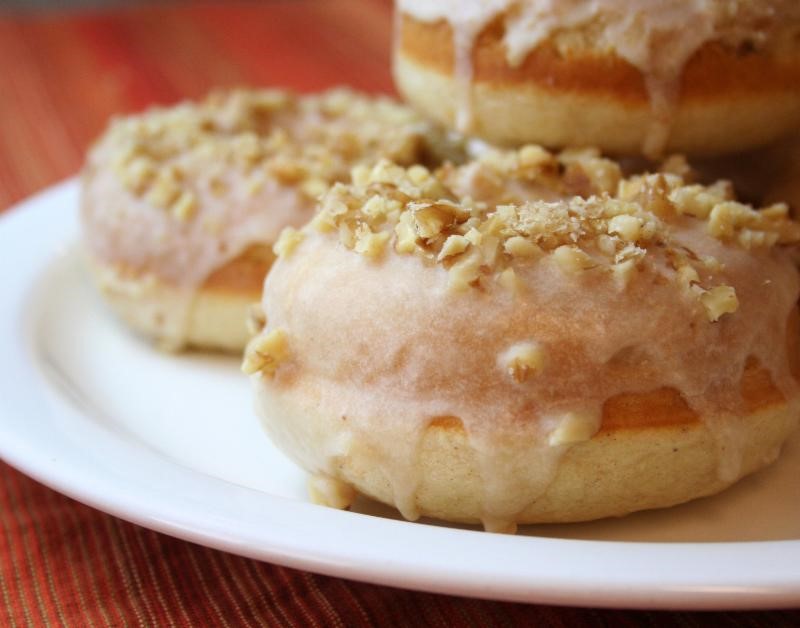 Donuts are usually fried.  Deep frying is not my favorite way to cook, but I love donuts.  So, when I came across a way to bake donuts, I was very interested.  I was even more so when I found a second way.

The first came with the discovery of a donut pan.  It’s like a muffin pan but the cavities are shaped like donuts.  You fill them with a donut batter and bake them like muffins.  They’re even a little crispy like a donut.  (The recipe is fat-free; fat softens the crust.) 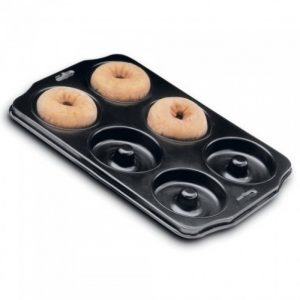 We sell a line of mixes for the pan but you can also make them from scratch.  You’ll find a recipe further into this article.

The second was a recent discovery.  In a cookbook of Middle Eastern and Eastern European recipes, I found a recipe for filled baked donuts.  (I don’t recall whether the author called them “baked donuts.”)  They were made with a sweetened yeasted dough and filled with a lemon-lime curd.  They were round like a dinner roll.

Making both the dough and the filling from scratch was too much work.  I grabbed a raised, glazed donut mix from the shelf and a pre-made lemon pastry filling.  Now the prep time was very reasonable.

I served them in the store warm, rolled in butter and sugar.  I was a pretty popular guy.  Everyone wanted to know how to make them.  They followed me through the store as I pointed out which mix I used and where the filling was.  Since then, we’ve made them with different fillings.

We now sell these as a Baked Donut Kit; the mix, and a filling in lemon, raspberry, or cream.  We think we have a winner.

See your choice of fillings. 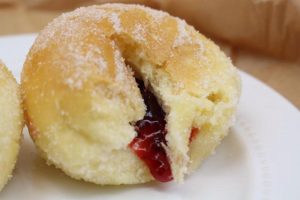 How to Make Filled Baked Donuts

To do them our way, you will need a donut mix and a bag of pastry filling, the kind that you clip the corner and press the filling into a donut or cupcake.  You can also make your filling from scratch and look for a raised, glazed donut recipe online.

If you make dinner rolls, this will be a breeze.

They are now ready to serve.  If you have kids at home, brace the door.

If that is more donuts than you want to make, you can refrigerate your remaining dough for three to five days.  You may also buy a smaller donut mix.

Note: Instead of rolling your donuts in sugar, you may also glaze them.  In a large mixing bowl, mix 3 cups powdered sugar with 1/2 cup warm water and 1/2 teaspoon vanilla extract until smooth.

Note: You will have leftover filling.  Fold the open corner over, put a clip on it, and store the bag in the refrigerator for up to six months.  Do not freeze.

Leftover filling can be used in cupcakes, between cake layers, for stuffed French toast, between waffles, in thumbprint cookies, and in other pastries.

These are great spice donuts.  Since you bake them instead of fry them, they have less fat and fewer calories.

Preheat the oven to 325 degrees.  Grease a baked donut pan.