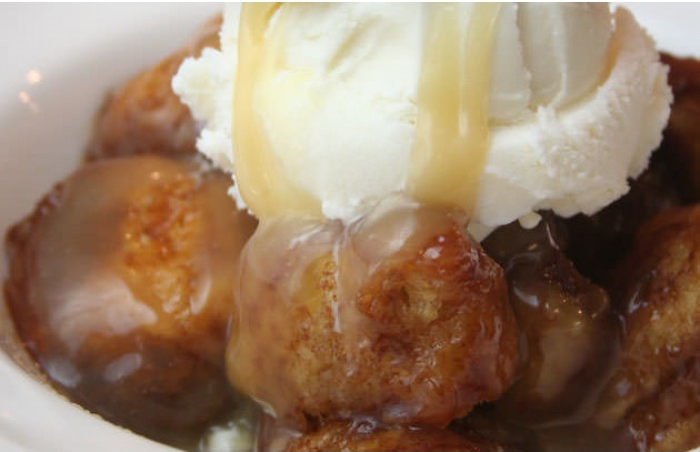 We always look at the dessert menus in restaurants.  If there is something intriguing, we order it.  The waiters probably think it strange that we’re studying their desserts instead of eating them.  Any dessert is fair game for a new recipe or mix.

One of our favorite local restaurants is Jakers.  At one time, they had a dessert on the menu: Cinnamon Bun Sundaes made with cinnamon bun monkey bread in a caramel sauce and topped with ice cream and whipped cream.  We love making monkey bread so this one landed squarely in our sights.

Back in our test kitchen, we went to work.  We made them both with monkey bread and with cinnamon rolls—actually, maple nut rolls–cut into bite-sized chunks with kitchen scissors.    The cinnamon roll version was good but we liked the continual coating on the monkey bread chunks.

There are two keys to making this dessert.  First, make sure that the pastry pieces are bite-sized.  We used the scissors to snip larger monkey bread dough pieces into smaller pieces.  Second, use plenty of caramel sauce.  We found caramel ice cream topping to be too thick and rich.  Buttermilk syrup is very good and you can pick different flavors.  If you want the sauce to be a little thicker than syrup, just cook it an extra few minutes.   We also made a “from scratch” recipe that was very good and we’ll include the recipe in this article.

So here’s how to make them:

Step 2: After baking, place bite-sized pieces of monkey bread in a wide-mouthed glass or in a bowl.  You may need to snip larger pieces into smaller pieces with kitchen scissors.

Step 3: Pour the sauce over the pieces.  Sprinkle with chopped nuts if desired.  (We used pecan pieces.)  Heat the monkey bread, nuts, and syrup combination until warm in the microwave.

Step 4: Add a scoop of ice cream.  Top with flavored whipped cream if desired and a cherry.