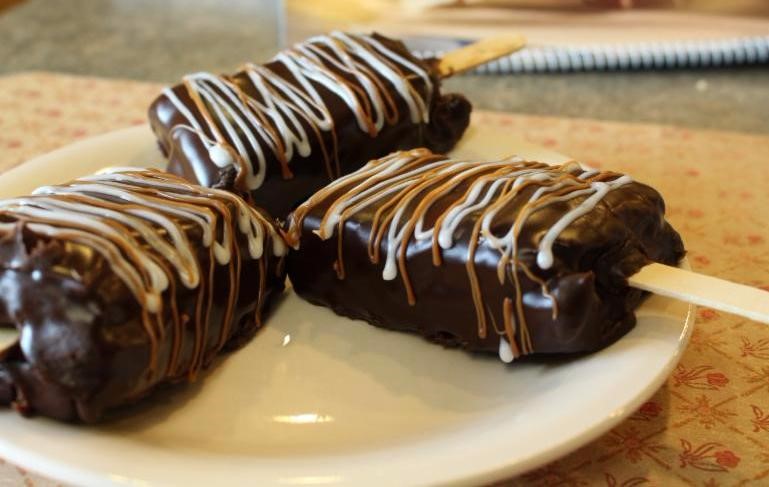 We were making blondies, batch after batch, testing mixes and making blondies faster than customers in the store could eat them.  These were fancy blondies: Peanut Butter Cup, Raspberry Sour Cream, and Caramel Nut Blondies.

At the end of the day, we had batches left over.  Rather than throw them out, we looked for something to make with them. 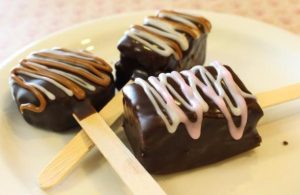 I remembered seeing a picture on a calendar of square brownie pops on a stick.  They had cut brownies into rectangles and then dipped them in frosting.  That seemed like a good idea.  We cut the blondies into squares, stuck popsicle sticks in each, and stuck them in the freezer.

After freezing, we dipped them in softened frosting . . . and had square brownie pops.

We’ve made both brownie and blondie pops.  In the accompanying image, is a raspberry sour cream pop cut open to show the raspberry pop.  The Raspberry Sour Cream Blondie is one of the new products that we were developing.

(Raspberry and sour cream is a great combination.  This was inspired by our Raspberry Sour Cream Pancake Mix.)

How to Make Square Brownie Pops

These are delightful and simple.  They don’t take any special equipment.  This is all there is to it:

Get our a brownie mix here!

Once we realized we had a winner, we made up batches of brownies and blondies to feed folks in the store.  They were a hit!

We stored them on a tray on parchment paper in the refrigerator.  They tended to stick a bit to the parchment paper.  Rather than pulling on the sticks, we used a thin-bladed spatula to separate them from the paper.

We used a biscuit cutter to cut round brownies.  Larger circles worked better than smaller ones.  Denser brownies work better than more cake-like ones.

I’m sure you’re more creative than I.  Make Easter egg shapes.  Cut a round one, stick a candy in the top for a stem, and make Jack-O-Lantern treats.  Make snow men or Christmas trees for the holidays.

Since we were using blondies, we colored-coded them with the drizzle to tell the raspberry ones from the peanut butter ones. 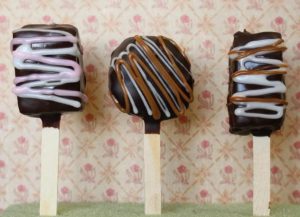