Home » Articles » How to Make a Skillet Breakfast

How to Make a Skillet Breakfast 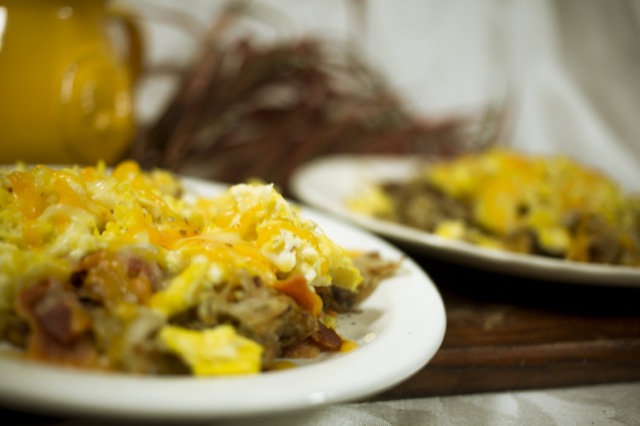 Plus, how to make crispy hash browns.

My oldest son and his family were in town from Minnesota. We stopped at a country diner for breakfast. Half of our party ordered omelets and the rest ordered skillet breakfasts. They were good; made of crispy hash browns with onions and bacon and then topped with scrambled eggs and cheese.

Back in the test kitchen, we tried to replicate the diner’s skillet breakfast. We got close. Here’s the recipe. This will feed two or three hungry people.

2 large russet potatoes, peeled and grated
1/2 sweet onion such as Walla Walla, sliced and chopped
4 slices of bacon cooked to a crisp and chopped
6 large eggs
2/3 cup grated cheese
Butter or bacon grease
Salt and pepper
The hash browns were nice and crispy, the result of squeezing the water from the potatoes and cooking them in grease.

The potatoes were a little too greasy for my taste. Most diners—and probably this one–wring the water from the potatoes by pacing the grated potatoes in a kitchen towel and twisting the towel.

You can get more water out by pressing the grated potatoes in a potato ricer. We used drier potatoes with the water pressed out with a potato ricer and cooked them in butter, just enough to make them crispy and not quite so greasy.

Wring the water from the potatoes, mix the potatoes and onion together, and fry them in grease or butter until cooked and crispy on the edges. Salt and pepper the potatoes while they are cooking.
Cook the bacon in a skillet or in the microwave until crispy. Chop it.
While the potatoes are cooking, scramble the eggs in a separate pan. Season the eggs.
To serve, place the potatoes on plates. Sprinkle with the bacon pieces. Top with scrambled eggs. Top with grated cheese. If your food is hot, the cheese should melt. If needed, place each plate in the microwave for just a few seconds to finish melting the cheese.

Once we had the basic recipe down, we tried variations on the theme. Instead of seasoning with salt and pepper, we seasoned with Hickory Smoked Sea Salt. We added it just before serving and then added a little more to get a strong smoked flavor. Instead of using four slices of bacon, we used six.

We added the salt right at the end so that it would not melt instead giving pockets of salty smoked flavor.

We used Italian sausage this time instead of bacon. Instead of seasoning with salt and pepper, we seasoned with Roasted Garlic Sea Salt and Zesty Italian seasoning. (You can try other Italian seasoning blends or other seasonings like those from the Teeny Tiny Spice Company of Vermont. Be sure that the blends you use are salt free or the sea salt and the salt in the blend may be too much.)

We added the salt right at the end so that it would not melt instead giving pockets of salty flavor.

They could have served them with Buttermilk Biscuits.

There are a couple of other variations that I’m anxious to try.

We have a gravy mix that is just-add-water and makes great gravy, perfect for biscuits and gravy. Instead of putting cheese over the top of the skillet breakfast, I’ll ladle on some of this gravy. I might season it with Za’atar seasoning. I really like this seasoning with my gravy.

Make the Mexican skillet like the Italian one but substitute chorizo for the Italian sausage and add some Mexican seasoning.  Serve it with salsa.