Home » Articles » A Guide to German Pancakes and Pannekoeken

A Guide to German Pancakes and Pannekoeken

Pannekoeken and German pancakes are perfect for summer. It’s a great way to take advantage of the seasonal harvest from berries through apples—even though putting syrup on them like pancakes is delicious.

They’re quick so you’re not stuck in the kitchen long. In our kitchen, a pannekoeken bakes in eleven minutes. And you don’t have the oven on long enough to heat up the house.

But most of all, they’re luscious. Your family love them. Guests will be delighted. And you can make a different variation every time so no one gets tired of what you serve. (The German pancake above is a simple dish that baked in 15 minutes, was drizzled with lemon syrup, and loaded with chunks of strawberries.)

“Just made my first Pannekoeken in my new pan and it was delicious – very impressive and so easy. Had no idea they were so easy to make.”–Janice P.

What’s the Difference Between German Pancakes and Pannekoeken?

I’ve often referred to pannekoeken as a Dutch version of a German pancake. That is, until some nice man said, “There is nothing German” about a pannekoeken!

They are different but similar. We use the same mix. The directions are different. On our packaged mixes have instructions for both.

A pannekoeken rises in a giant bowl. Typically, but not always, the fruit is loaded in after the pannekoeken comes from the oven. A German pancake buckles and folds and most often, the fruit is baked in batter.

Below is a pannekoeken just about to come from the oven. That’s an eleven-inch pan. The sides of the pannekoeken are rising six to eight-inches above the pan. 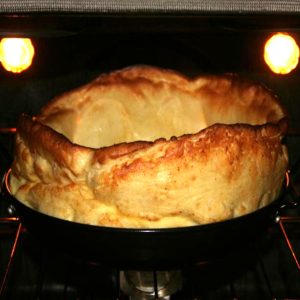 Below is a pannekoeken with the fruit, thin apple slices, baked in the batter. Because it was loaded with apples, it didn’t rise like most pannekoeken. Instead of eleven minutes, it was baked in fifteen. It was very good; just different. 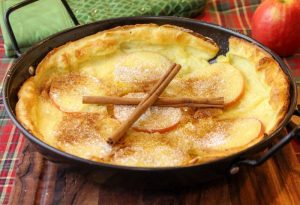 The strawberry German pancake above is typical but was not baked with fruit. Without fruit in the batter, it baked very quickly even in a 9 x 13-inch pan.

Below is a German Pancake with apples baked in the batter. You can see how the batter folded over the apple slices. Debbie made that but I suspect it took 18 to 20 minutes to bake.

Usually German pancakes have brown sugar sprinkled through the melted butter on the pan. That creates a crusty caramel crust. You can see that best on the strawberry German pancake at the top.

Next is a huckleberry German pancake with the berries baked in the batter. 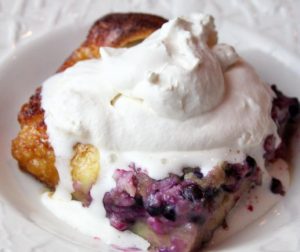 The pannekoeken below is loaded with peaches, drizzled with a buttermilk syrup (caramel flavored), and topped with whipped cream, probably caramel. This is typical of many pannekoeken, though again, they are often served without the fruit, just syrup. 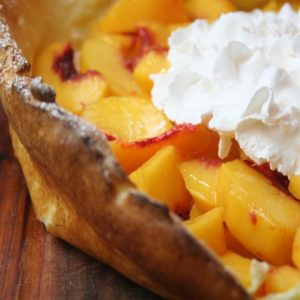 When we lived in Minnesota, there was a chain of restaurants that served pannekoeken breakfast, lunch and dinner. A breakfast pannekoeken might be made with scrambled eggs, the lunch with veggies and a cheese sauce, and the dinner made with taco fixings or made like a shepherds pie.

Here is one made with scrambled eggs and ham and another made with taco fixings. 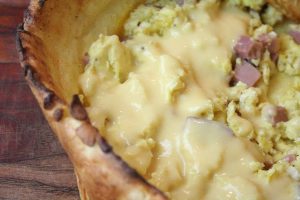 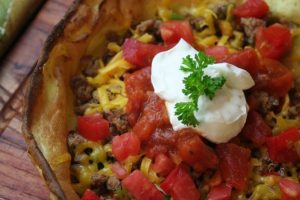 For A German Pancake

You can use an appropriately sized pan. On the back of our mix, is a table for anything from an 8×8-inch to a 9×13-inch pan.

Of course, you’ll need a mix or a recipe.

You don’t have to have a pannekoeken pan; the right nonstick skillet will work. The pan must have a very good nonstick surface—the batter must climb the walls of the pan as it bakes. The transition between the bottom and the sides must be rounded. If it is not, it will buckle instead of climb.