Home » Articles » The Blondies and the Baking Lessons

The Blondies and the Baking Lessons 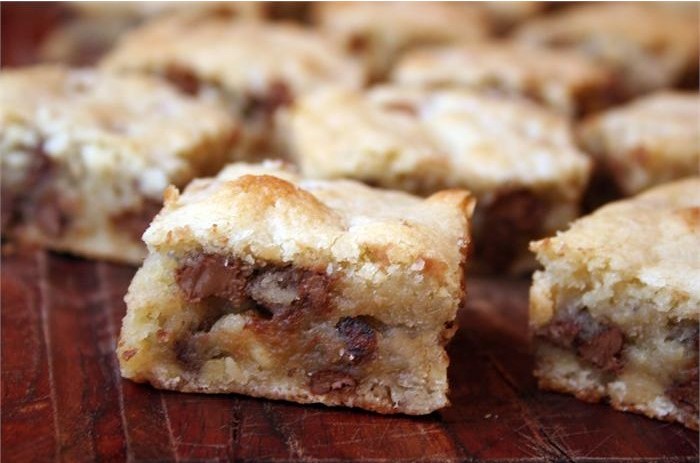 What You can Learn from a Blondie?

These blondies are really good, so good that a major company commissioned us to make them a blondie mix.  The original Chocolate Caramel Pecan Pie Blondies are thick and moist and chewy, loaded with chocolate.  They’re made in a dark, nonstick 9 x 9-inch baking pan.

These good folks wanted a blondie that would work in 9 x 9-inch and 8 x 8-inch pans and in both glass and metal pans.  Now that would take some doing.

See what you can learn from our journey.

It’s the depth of the batter that determines baking time, not the size of the pan.  All else being equal, a large cake will bake as quickly as a small cake as long as the batter is the same depth.

That deeper depth means that it may take four or five minutes longer in the oven.

With More Baking Time, the Baking is Different 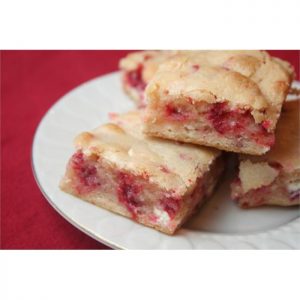 By the time we drove the heat through the thicker batter, the edges were way too crusty.  When we stopped short, where the edges were just right, the center was gooey.  Wasn’t there anything we could do?

We tried reducing the temperature by 25 degrees giving the heat more time to drive through pan of blondies.  A lower temperature should allow it to bake more thoroughly.  It did but it also dried out the edges until they were crunchy.  A lower heat always makes a cookie crunchier.  This would never do.

Changing the Formulation Changes Everything

Everything changes when you start tinkering with the recipe.  First we tried changing the crumb, the openness of the texture with baking powder.  We reasoned that if we added more gas bubbles, the heat would drive through the air cavities more quickly.  We would need to reduce the batter but the remaining batter would make a taller cake.

We used baking powder because it has a balanced mixture of acid and base and wouldn’t change the pH of the blondies like baking soda would.  (Baking soda is only a base and requires an accompanying acid.) Well, nice try.

Even though we only used 1/2 teaspoon of baking powder, it changed the texture.  It also changed the color and the flavor.  It was an ugly brown color, the edges were crisp and pock-marked, and our nice flat cake was now sunken.  And it tasted nasty.  I headed to my office and stuck my nose in my text books to see if I could figure out what happened.

We only had two avenues left: Reduce the size of the mix so that the depth would be optimal for an eight in pan (but then it would be too thin in a nine-inch pan) or start adding flour.  We knew that adding more flour would make for a more cake-like blondie.  We didn’t want that.

But What About the Glass Pan

But the glass pan didn’t change the texture of the blondies.  An eight-inch glass pan had exactly the same problems as the eight-inch metal pan. 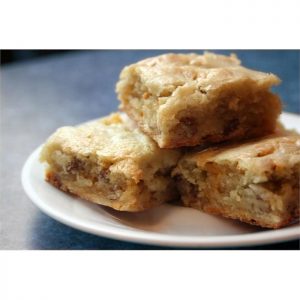 So What was the End Result?

We called our client and explained that if we kept working at it, we would get a cake that would work in all three pans but that it would be a compromise, a compromise of texture, batter depth, and the formula—probably the taste.

They made the right decision: optimize the mix for a nine-inch pan, make it the best that it can be.

We were right back to our original formula.

So What’s the Big Lesson?

Baking is all about precision, about science and reactions to chemicals and heat and mixing methods.  Cooking is much less so.  Cooking is an art while baking is a science.

That’s why we use oven thermometers (so we know precisely what our beginning temperature is), kitchen scales (weighing is more accurate than measuring), and we have tested our measuring cups and spoons for accuracy (one cup of water on the kitchen scale better weigh eight ounces).

When we are through with a mix, we can say, “Those cookies, that size, on a dark pan, at 350 degrees with take 8 minutes and 45 seconds to bake.”

Post Script: How Did We Come Up with that Original Formula? 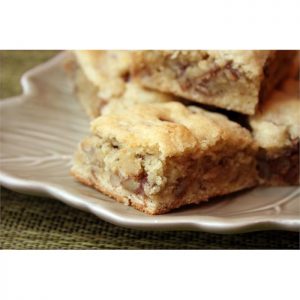 If you’re interested: We develop our mix formulas on spreadsheets where we can keep track of ingredient ratios and hydration to a fraction of a percent.  Each trial is on a different spreadsheet in the workbook and we change one element at a time and record the results.  A mix may take 30 or more trials

This blondie mix started out from a 9 x 13-inch brownie recipe.  We took out the cocoa and changed one element at a time until we got it right.  Then we changed it some more to make sure that we were at the optimal point.  Pretty simple if you don’t mind baking a lot of blondies.

See all of our blondies.