Grumpy Cupcakes are the creation of the Just Baked bakery chain in Michigan.  Our version is made with a moist cream cake cupcake filled with Bavarian cream 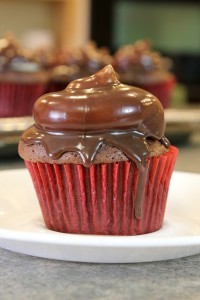 and frosted with a buttercream frosting.  Then the top of the cupcake is dipped in ganache made with gourmet chocolate.  The ganache melts the buttercream just a bit to make pillowy mounds of chocolate covered buttercream. There is also a version made with ice cream in the “Ice Cream Filled Cupcakes” section of this book.

Mix and bake cupcakes according to package directions.

Clip a corner on the two-pound pack and squeeze about 1/3 ounce through the top of each baked cupcake.

You can use our vanilla buttercream frosting mix, our basic buttercream recipe, or a recipe of your choice.  Make the frosting with butter, not shortening.

Bring the cream just to the boiling point.

Remove from the heat and add the vanilla.  In a medium bowl, pour the hot cream over the chocolate. Stir until the chocolate is melted. Stir in the butter. Let the ganache cool until it reaches a desired thick consistency.

You can heat it or cool it as needed to get a thicker or thinner coating.

Bake the cupcakes and let them cool on a wire rack. Fill them then frost them. To get the pillowy mounds of frosting, we use a round tip on a pastry bag, not a star tip, to apply the frosting.  Dip the frosted tops in the warm ganache.  The ganache should be cool enough so that you get a generous coating of ganache on the cupcake and so that it just barely starts to melt the frosting.

You can make these cupcakes with ice cream filling instead of Bavarian crème if you’d like. Use an ice cream cupcake tool.  Use the larger diameter fitting and cut a plug out of the center of each cupcake.  Use the same fitting to cut vanilla ice cream plugs and insert them into the cupcakes. Bake and frost the cupcakes just as before.