Home » Articles » Use this Bakers’ Secret for Delightful Parties, Receptions, Reunions, and Picnics

Use this Bakers’ Secret for Delightful Parties, Receptions, Reunions, and Picnics 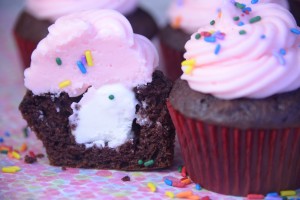 When  our youngest daughter Katie got married,our other daughter Debbie and I were in charge of the cupcakes for the reception.  I think they were pineapple cupcakes with a cream cheese filling.  I remember the lavender frosting with a dusting of lavender sugar that made them almost iridescent.  They were a hit.  (We sell all this stuff.)

How long does it take to fill and frost a couple hundred cupcakes?

Not long.  With me filling and Debbie frosting, I doubt that we spent 15 seconds per cupcake.  Neither of us was picking up the cupcakes, just working our way down the table filling and frosting.  Maybe it took an hour.

Of course that was after the frosting was made (in big batches).  Debbie was using our giant pastry bags.  I was using cream cheese pastry filling in two pound dispenser bags.  (We sell this stuff too.)

You may not need 200 cupcakes for a reception.  But you may need 50 for a family reunion, 24 for Johnny’s birthday party, or a dozen for a picnic.  It doesn’t matter.  It’s all quick.  And filled cupcakes are always a fun, delightful way to do a party, a picnic, dessert for dinner, or family night.

You can do this.  It’s really simple.  Today, we’ll focus on filling the cupcakes.  It’s easier to show than tell you.  So watch this short video.

One of the most popular combo’s is raspberry and Bavarian cream.  Everyone is delighted to bite open a cupcake and find a raspberry swirled center.

As I write this, Kelli is in the test kitchen making a variety of cupcakes for visitors to our store in Rigby, Idaho.  One is Chunky Monkey Cupcakes.  The centers are filled with a banana cream filling made simply by mashing ripe bananas and mixing them with Bavarian cream, about 40% bananas and 60% Bavarian Cream.  The mixture is loaded into a pastry bag with a star tip and the inserted just as if you were using the commercial dispenser packs. 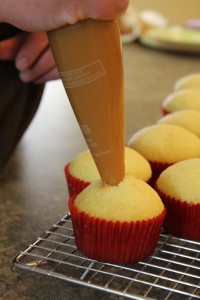 You can use those grocery store cake mixes but there is so much air and so little cake that the combination of frosting and filling tends to overwhelm the cupcake.  We think scratch cupcakes are much better.

We use cream cake mixes with density part way between airy cake mixes and a pound cake.  The cupcakes are maybe twice as dense as with store mixes and balance much better with the frostings and fillings.

We stock twelve kinds of pastry fillings all in the dispenser bags, three cream fillings and nine fruit fillings.

The most popular filling is Bavarian Cream.

Two pounds will fill about 50 cupcakes.  Leftover fillings store well in the refrigerator for six months or more.

You can make your own fillings but I doubt that you can buy the ingredients for the cost of the packs.  That’s the bakers’ secret, these handy dispenser packs that make great pastries and don’t cost very much. 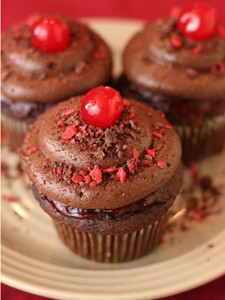 You can frost them any way you please.  The frosting covers up the hole you made in the top of each cupcake.  The one-pound tubs you buy in the grocery store work just fine.  We sell two-pound tubs (so you don’t run out half way through your project) in a fudge frosting and a salted caramel frosting.

We sell buttercream frosting mixes intended for large projects.  You add your own butter or shortening and powdered sugar.  Each makes about 2 1/2 pounds of frosting.  You can add colors, spices, and/or flavors to the vanilla frosting.

I’m very partial to whipped cream frosting and much prefer it over buttercream.  We sell it in a chocolate frosting mix, Better-Than-Buttercream Chocolate Frosting Mix.  You can make it from scratch—we’ll give you the recipe in the following article.  It’s easy to make but you will need a stabilizer to retard melting of the frosting.  Use two to four tablespoons of meringue powder per frosting batch.  No matter how much stabilizer you use, it will not hold well overnight.

If you are spreading your frosting with a knife or spatula and using the dispenser packs for the filling, you won’t need any special equipment.

If you are piping the frosting onto the cupcakes, you will need pastry bags and large star tips or round pastry tips.  We use disposable bags and don’t bother buying and using couplings.  We just cut the tip off the bag and push the tip into the bottom of the bag.  The frosting holds it in place. You can store leftover frosting in the pastry bag in the refrigerator.

If you have a large project, consider our extra-large (we call them giant) disposable pastry bags.  It’s a pain-in-the-neck to have to stop to refill a bag.  They are tough enough that we wash them out and use them three or four times.

Everyone wants to know how to tell when you have enough filling in a cupcake.  It seems more complicated than it is.  After a few cupcakes, you’ll be perfect.

If you are holding the cupcake as you fill it, you will feel the cupcake start to swell and get heavier.  If you overfill the cupcake, you will start to get cracks around the hole.  Both by look and feel, you’ll very soon get the hang of how much to use.

Two pounds will do 50 cupcakes.  If you do the math, that’s about .65 ounces per cupcake.  If you have a kitchen scale, weigh the first two or three cupcakes before and after filling.

If you don’t’ have scales, break the first one open and see how much filling you have.  The baker deserves the first cupcake anyway.

The tendency is to put too much filling in your cupcakes.

Cupcakes are best the same day they are made but depending on the frosting, can be held overnight.

You’ll enjoy making these cupcakes and never go back to empty cupcakes again.