An Easy Way to Make Fantastic Desserts in 14 Minutes 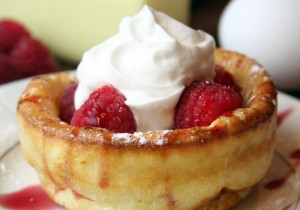 These will stop them in their tracks! They’ve never had desserts like this before. Not even close. They’re mini pannekoeken.

Think of them as individual desert cups, only really good. The ones above are raspberry cream. Make a batch of dessert cups in less than 14 minutes. Squeeze a little premade pastry cream into each cup. Throw a handful of berries on top and drizzle them with a fruit syrup. Add dollops of whipped cream.

You can also make hot fudge sundaes, banana splits, strawberry shortcakes, and hundreds of other desserts in these easy dessert cups. You can even make them in chocolate if you wish.

How to Make the Individual Dessert Cups 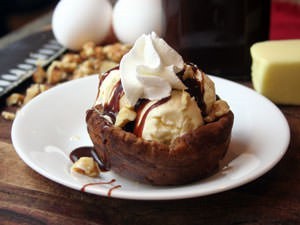 Plus whatever you want to fill them with. That’s it. They’re really simple to make.

Preheat the oven to 425 degrees.

The Secret that Makes these Foolproof

If there is a secret to making Dutch babies, pannekoeken, it’s a hot oven. There is no leavening in the batter; it’s all driven with steam like a popover. So you have to have a lot of heat in a hurry for expansion.

Ovens are notoriously inaccurate, even brand-new ovens. If your first batch doesn’t rise the way it should, turn your oven up 25 degrees.

Suggestions and What to Fill Them With 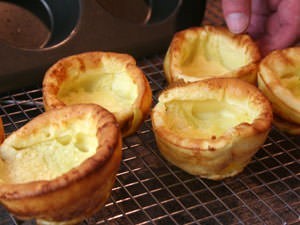 You’re limited only by your imagination. Pastry fillings are perfect—we have 12 kinds—but you can use pudding, pie filling, ice cream, and more. Use any fruit that you want. We have over 30 kinds of pancake syrups and desserts sauces to choose from. Or make your own.

It’s easy to top them with a spray can of whipped cream. It’s more fun to make flavored whipped cream—from caramel nut to chocolate to strawberry cheesecake whipped cream. How about a peanut butter hot fudge sundae made like this: 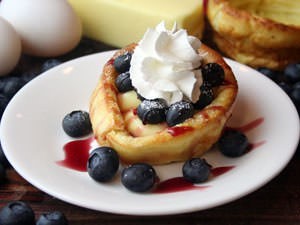 It’s what your baker fills his donuts and pastries with—jelly filled donut or an apple strudel or a cream filled cupcake.

They come prepackaged. Clip a corner and squeeze out what you need where you need it. To save the remainder, fold the corner, put a paper clip on it, and refrigerate it. It will last for at least 90 days.

Buy these fillings in handy dispenser packs from $2 to $4 per pound.