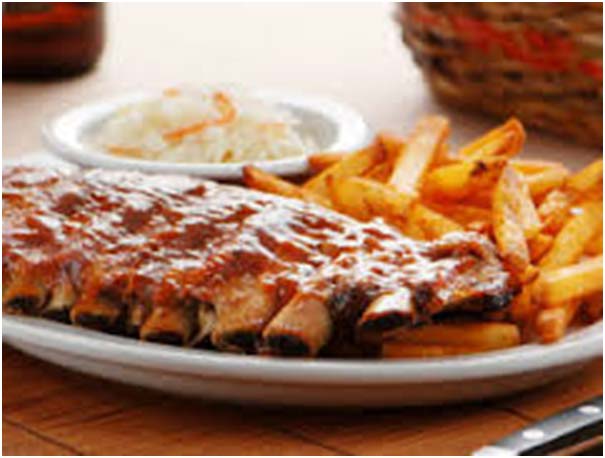 Saturday was delightful. Diane Jensen, the founder of Gresham and Myers spice company, came to the store and made ribs. She recruited her son and husband to help.Wonderful people, terrific ribs.

Time and again, people told us they were the best ribs they had ever tasted. They were surprised that they were so simple to make.

The meat’s not expensive either. Dianepaid $2.05 a pound at Sam’s club. Someone said that they were $1.79 at Albertsons.

I’ve never made ribs. They seemed too involved. Diane made them easy, basically three steps.

Her barbecue sauce is terrific, made with the same spice blend and few simple ingredients.

A four-ounce canister of Gresham and Meyers Barbecue Rubwill make 3 slabs of regular ribs or 4 slabs of baby back ribs plus one recipe of barbecue sauce, about 22 ounces or 2 3/4 cups sauce. Extra sauce can be refrigerated.

It’s best to start these the night before. Then you can let the meat absorb the flavors of the spices overnight. Total cook time, including the slow cooker and grill, is three to four hours.

Both the sauce and the ribs can be made ahead of time. To make the ribs ahead, cook the ribs in the slow cooker or the oven and then store them in the refrigerator for up to ten days or the freezer for up to four months. Thaw the ribs before finishing them on the grill.

This can be made ahead of time and stored in the refrigerator for up to two weeks.

Mix all the ingredients in a saucepan and cook until the sugar is dissolved the sauce is hot.