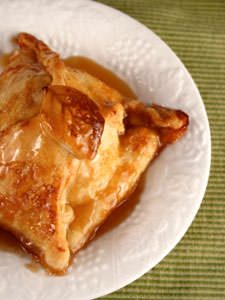 We’re a little too far north for great peaches. But when we travel to Salt Lake City, a couple hundred miles to the south, we pass by Brigham City, a little city set against the foothills and lined with orchards. A detour off the interstate yields a lineup of roadside fruit stands with some of the best fruits found anywhere.

For the vanilla cream sauce:

Directions for the pastry:

1. You will make the pastry as you do pie dough.
2. In a medium bowl, mix the flour and salt together. Cut the cold shortening and butter in with a pastry blender until the mixture has the consistency of kernels.
3. Add the almond extract to the water. Drizzle nearly all the water into the flour mixture. With a fork, stir the water into the flour mixture until a ball begins to form. Press the rest of the flour into the ball and add more water as needed. Knead the dough several times to form a uniform dough but no longer. Divide the dough in half. If the dough is becoming warm and soft, refrigerate the dough until it is chilled.
4. Working with half the dough at a time, roll the dough into two squares 12 inches by 12 inches. Cut the dough into fourths so that you have eight 6 inch by 6 inch squares for eight dumplings. Chill the dough squares stacked between sheets of waxed paper while you make the sauce.

1. In a heavy saucepan, mix the brown sugar and corn starch together until the corn starch is well dispersed in the sugar. Stir in the cream.
2. Heat the sauce until it boils and thickens, stirring with a whisk. Remove the pan from the heat and stir in the butter. Add the vanilla and cinnamon.

For the peach filling:

1. Remove the dough squares from the refrigerator. Place a half peach cut side up in the center of each square. Sprinkle the brown sugar over the peach halves, dividing the brown sugar evenly. Sprinkle with just a touch of nutmeg. Divide the butter into eight chunks placing a chunk on top of each.
2. Fold the corners of the pastry over each peach half bring the corners together to make a four-sided pyramid. Press the edges together and seal them so that the peach juice will not leak while cooking. If you like, you can decorate the tops of the dumplings with any leftover pieces of dough.
3. Brush the pastries with the milk and sprinkle with the optional turbinado sugar. Using a spatula, gently move the pastries to a buttered 10 x 15-inch baking dish. Bake for 40 to 50 minutes at 350 degrees or until the pastries are gently browned. Remove the pastries from the pan while they are still hot and before any sugar that might be in the pan sets.

To serve, let the dumplings cool for about a half hour. Drizzle sauce over the dumplings and serve with the remaining sauce on the side.