How To Make Milkshake Cupcakes 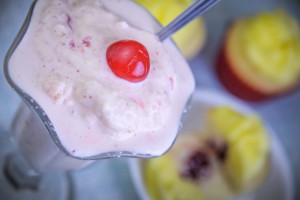 I watched a video hosted by a national bakery supplier about making cupcake milkshakes. Very interesting. I love ice cream with my cake.

I brought it to the staff’s attention as a potential project. They told me that I had been living under a rock; that there were restaurants in both Rexburg to the north and in Idaho Falls to the south that served cupcake milkshakes. So we bought a bunch of ice cream—we always have cupcakes—and got started.

They were easy to make. You make the milkshake and then throw a whole cupcake in the blender. The trick is not to over-process it. You want chunks of cupcakes.

To Make the Cupcakes

Nearly all of our cupcakes are filled with pre-made pastry fillings. See how to fill cupcakes. Most are frosted with buttercream frosting, though pre-made frosting works fine.

A Recipe for Cupcake Milkshakes