Home » Articles » How to Make Stuffed and Crusted French Toast

How to Make Stuffed and Crusted French Toast 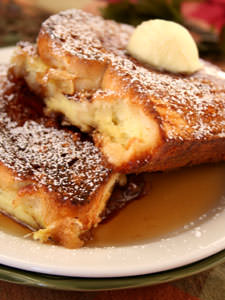 To make stuffed French toast, you literally make a sandwich, dip it into your egg batter, and fry it on the griddle. It’s that simple. The magic is in the fillings. You can use acream cheese fillingand fresh fruit.

You can usejam. We usually usepastry fillings, oftenBavarian cream, to make fillings like strawberries and cream.

When making stuffed and crusted French toast, after dipping your sandwich in egg batter, you dredge it in chopped nuts or coconut. I’m sure there are other things you can dredge your French toast in.

In our cooking class, we dredge French toast in acandied toasted coconut topping. The sugar in the coconut melts creating a crunchy coating. By the way, in this same class we make pecan crusted French toast filled with either a cherry or raspberry filling paired with Bavarian cream or cream cheese filling. We simply squeeze some of the fruit filling with some of the cream filling on the bread before sandwiching the two bread slices together. See all of our pastry fillings. You can make breakfast exciting.

You can make this stuffed and crusted French toast either with pre-made pastry fillingsor from scratch using cream cheese and jam for your filling. The scratch recipe follows.