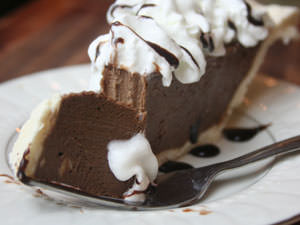 We love French silk pies with their silky smoothness.  They seem the most sophisticated and regal of the chocolate pies.

Silk pies would be perfect except for one detractor—they’re made with raw eggs.  Now, we know that with the right amount of sugar, they’re safe but still—they’re a detractor.  So we set off the make the perfect French silk pie with cooked eggs.

We searched our cookbooks and the internet for French silk pies where the eggs are cooked.  There are several methods, some calling for baking the pie and some calling for cooking the filling and placing the cooked filling in a baked pie shell.  We chose the latter.

How to Make Our French Silk Pies

What makes French silk pies so silky?  They are made with eggs, butter, chocolate, and sugar.  There is no starch with its relative coarseness and unlike a custard pie, the filling melts in your mouth since both the butter and the chocolate melts at body temperature and the sugar dissolves in the filling.  Once cooked, the eggs coagulate so the percentage of eggs must be low.

This method calls for beating the eggs in a pan on the stovetop with a handheld electric mixer until they reach 160 degrees, the point at which eggs are cooked.  The beating incorporates air into the eggs for a light filling.  Then, while still hot, the butter and chocolate are added.  Finally whipped cream is folded in.  This method makes an amazing French silk pie filling.  It’s silky smooth, chocolaty, and sets up firmly once chilled.

The method is pretty straightforward except for the cooking of the egg and sugar mixture on the stovetop.  We were afraid of scorching the eggs so the first time, we cooked them in a double boiler.  Too slow.  The next time we cooked them in a sauce pan over direct heat.  At the lowest setting, it was still too slow.  (Maybe we’re just not patient enough.)  We did it several more times adjusting the heat but keeping the beaters running all the time.  We found that we could turn the heat up to medium or just a little higher for the first couple minutes to heat the eggs and then drop it back to somewhere between low and medium.  It is important to keep the beaters running and moving around the pan steadily but we could have the eggs cooked to the desired temperature in about ten minutes.

The flavor is carried by the chocolate.  Be sure to use a good quality chocolate.  We used our chocolate wafers [1], which is sweetened chocolate of candy making quality.  In a pinch, you can use semi-sweet chocolate chips.  Chocolate chips have a coarser grind than do wafers (one’s intended for baking and the other is most often used in candy and pastries) but we doubt that you can tell in this application.  For us, bittersweet chocolate is too harsh for the delicate nature of French silk pies.

The Cousins:  Variations on the Theme

One of our objectives in this project was to make samples that we could hand out to customers in our store.  Rather than make standard pies and cut them into slices, we wanted to make individual pies . . . and we wanted to make a lot of them.  We tripled the recipe and used muffin pans with paper liners.

We made simple crusts with chocolate cookie crumbs, sugar, and melted butter.  We put a heaping tablespoon in each liner and compressed the crumbs with one press with a tart tamper [2].  (The right sized bottle will do.)  We then baked them five minutes.  We used a large cookie scoop [3], 1/4 cup, to quickly load each cup with the right amount of filling and stacked the pans in the refrigerator to cool.

This made such a nice dark chocolate filling, we had to try white chocolate. We did and liked that even better than the dark.  We matched the white chocolate up with both fresh peaches and strawberries.  First, we tried to add diced fruit to the finished filling, mixing it in before chilling.  It added too much moisture and didn’t set properly.  So we settled for putting the fruit on top of the filling.

We are intrigued with this filing and will do some more exploring. We love the texture and want to match it with different flavors.  Next up is adding cream cheese instead of chocolate.  But that’s another project for another day.