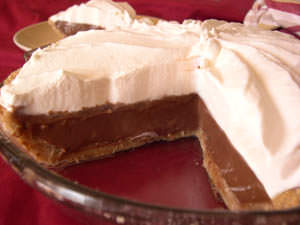 Cool, creamy pies go well with summer. They are easy to make, don’t take a lot of baking, and often smooth and light. Can you think of anything that you would rather take to a family reunion than a pair of cream pies? Everyone loves them.

In this article, we will go through the steps for making cream pies. Baking is both an art and a science. We’ll try to tell you not just what to do but why it works. Since cream pies are made with and without meringue toppings, we will include directions for meringue toppings.

Cream pies are made in pre-baked single pie shells. Make the pastry dough from the recipe of your choice. Roll the dough to a thickness of about 1/8-inch thick. You can use a toothpick to gauge how thick the dough is in various spots.

Trim the dough about 1 inch beyond the edges of the pie pan. Turn the edges under and flute the edges for an attractive finish.

For cream pies, use a fork to prick the surface of the pie crust. The holes will allow steam to escape as the shell bakes instead of creating bubbles.

Cream pies need to be firm enough to hold their shape when cut and served. They rely primarily on the coagulation of the proteins in the eggs to create that structure. Often flour or cornstarch is added for additional structure and to prevent the pie from “weeping”.

Mix the sugar, salt, and flour or cornstarch together in a saucepan. It is important that the combination be thoroughly mixed so that the sugar particles separate the flour and avoid lumping.

Gradually pour the liquid into the sugar mixture while stirring.

Cook the mixture over medium to medium-high heat, stirring regularly, until it is thick and bubbly. Cooking over low heat takes too long. Cooking over high heat may scorch the filling. The higher the heat, the more diligent you must be in your stirring.

Once the filling is bubbly, cook and stir for two minutes more. The continued cooking will gelatinize the starches in the cornstarch or flour and avoid the pasty taste of undercooked starches.

In most recipes, egg yolks are used instead of the whole eggs. The egg whites can be saved for a meringue topping. The fat in the egg yolks add a pleasant “mouth feel” to the custard and the yolks have a high protein content to make the filling firm.

The egg yolks need to be tempered before adding to the pan. Whisk the yolks together in a medium bowl until combined. Take about one cup of hot filling mixture and pour it in a stream into the egg yolks while stirring constantly. This will warm the egg yolks so that they will not curdle and lump as they are poured into the hot mixture.

Pour the egg yolk mixture into the rest of the hot filling while stirring constantly.

Immediately return the saucepan to the heat and cook for two more minutes. This cooking will cause the proteins in the egg yolks to coagulate—they coagulate at about 160 degrees—and create a firm pie filling. Do not overcook. Overcooking will weaken the protein structure.

Stir the butter into the hot filling along with any extract that the recipe may call for. Use a rubber spatula to scrape the pie filling into the cooled pastry shell.

Place the egg whites in a medium bowl, one with deep, straight sides works best. Four large egg whites will make enough meringue to cover a nine-inch pie. For a larger, more generous topping, use five or six egg whites.

Add one to 1 1/2 teaspoons vanilla and 1/2 teaspoon cream of tartar. Do not add the sugar yet. Beat for about 1 1/2 minutes or until soft peaks form. Do not over-beat.

Add 1/2 cup granulated sugar gradually to the mixture as you beat. Beat for another four minutes or until stiff peaks form. Rub a little of the meringue between your fingers to make sure that the sugar is dissolved. You should not feel any grains of sugar between your fingers.

With a spatula, spread the meringue topping on the pie. Push the meringue against the crust to seal the edges. (If the meringue is not anchored on the crust, it will tend to pull away from the crust in baking.)

Bake the pie for 12 to 16 minutes or until the topping is a golden brown.

Store the pie in the refrigerator. To cut the pie, first dip the knife in cold water; the meringue will not stick to a wet knife.