In February 2016, we taught several classes.  From that experience and comments from class members, we’ve made the changes and passed on suggestions that are noted here.

Four different people have used this recipe in our test kitchen.  No one had a problem until they doubled the recipe.  Then three of the four had problems.

“Why?” I wondered.  The chemistry doesn’t change.  The method is the same.  Finally, we figured it out.

From the class, this is what we learned.

More people liked chocolate rather than raspberry or lemon.

People love the Bavarian cream but they like a good whipped cream filling even better.  Make the whipping cream and insert it in the side with a pastry bag.

Instead of melting chocolate, we heated Sweet Sensations Fudgy Frosting and dipped the tops of the cream puffs in the melted frosting.  It’s quicker and less expensive than chocolate.

Instead of dipping the cream puffs in the fudgy frosting, try the salted caramel frosting.  Fill them with caramel whipped cream for incredible cream puffs.

How to Make Cream Puffs 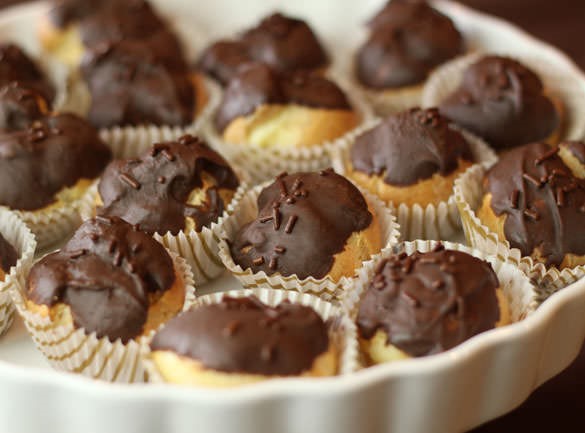 There are three parts to cream puffs: the baked pastry shell, the Bavarian cream filling, and the chocolate topping.  It’s not just the combination of tastes; I love the crisp shell against the cool, silky smooth Bavarian cream along with the melt-in-your-mouth chocolate.

Step 1:  The pastry shell.  There are only three ingredients excluding the water.  There is no baking powder or yeast; these are leavened with steam.

There are two important keys to success:

Step 2:  The filling.  Buy premade Bavarian cream.  You can buy it cheaper than you can make it and it’s a lot less trouble.  It comes in a two-pound squeeze pack.  Cut a quarter-inch off the plastic package, insert the tube in the edge of a pastry, and squeeze.  You’ll feel the pastry become heavier and start to swell as the Bavarian cream fills the pastry.  It’s the easy way to fill cream puffs.  It’s also the same way we fill cupcakes. See the easy way to fill cupcakes with pastry cream.
When you’re done filling your cream puffs, fold the corner on the pastry bag over, put a paperclip on it, and store the rest of your pastry cream in the refrigerator for up to six months.

Step 3: The chocolate.  You can use any sweet, high-quality chocolate.  Chocolate wafers are made for candy making and have a smoother grind and more cocoa butter than chocolate chips.  You can either dip your cream puffs in the melted chocolate or spoon it over the top of each.  The hotter the chocolate, the thinner the coating.  If it is melted but not too hot, you’ll get a thick layer of chocolate.

This is the recipe for traditional cream puffs made with Bavarian cream and chocolate.  Following are instructions for making variations like raspberry, cherry, and lemon cream puffs.

You can also use a small cookie scoop. You’ll just need to lower the baking time to 15 minutes at 400 degrees and then turn down to 350 for another 7 minutes.

The Family of Recipes:  Variations on a Theme

Discover a whole new world of cream puffs like raspberry cream, cherry cream cheese, and lemon cream puffs.  You can make these by simply varying the filling and the topping.

The topping doesn’t have to be melted chocolate. You can top your cream puffs with melted white chocolate or with frosting.  You can tint your frosting or white chocolate with professional color gels and add flavors.

A lemon cream cheese frosting on a lemon cream puff is delightful.  A raspberry cream filling and a raspberry frosting tinted light pink is a favorite.  (We recommend Marsden and Bathe Flavors and Americolor Professional Food Color Gels to get your frosting the right flavor and color.  They are both reasonably priced and Americolor comes in such a wide selection of colors like four shades of pink.)

We used this recipe: